by Tushar Jain Posted on May 29, 2017 in Mobile
Before we deep dive into the technical jargons of the mobile app performance indicators that this article suggests, let’s forget that you are a business owner with a mobile app idea planning to monetize or is in its early stages.

Put yourself in your consumer’s shoes – well, you might as well be using an app on your smartphone for messaging, social networking, shopping etc.

What would you do if –

The result is obvious. And there is no reason why you would want your business app to follow the footsteps of such apps. It gives you a clear picture of why users generally uninstall your app.

To avoid this situation, you must be already aware that if your business has a mobile app or is planning to roll out one soon, it is essential to measure the mobile app’s performance metrics as well. And to go about it, there are several indicators your business analytics team measures.

While you won’t get an idea of the business or engagement metrics until your app goes into production, you can still use some mobile testing tools to perform the basic diagnostics and collect the technical metrics associated with your app.

How do you benefit from measuring mobile app performance metrics before launch?

1. Better utilization of your budget

Since you are still in the process of developing and testing the app, you haven’t yet utilized your expenses on app promotion and maintenance.

By the time you release your app to the consumers, you would have already had addressed the prospective challenges and compare the app benchmarks as per competition.

Tracking your app’s performance is the very first step to assess and validate it. Below are some of the KPIs that are directly proportional to its usability:

If it takes more than 2-3 seconds to load your app, no matter how well designed it is, chances that the consumers will abandon it will rise.

According to the mobile app survey report by Dynatrace, the median expected load time for a mobile app to launch was found to be 2 seconds:

Additionally, you will have to observe if the amount of data that travels the network directly impacts the network bandwidth and consequently your app’s performance.

You can adopt the following measures to optimize network delivery:

The time your app screen takes to load the content, images, videos, animations on the mobile screen is essential to mobile app performance.

Following are the factors that largely impact screen rendering:

You should be taking effective steps to rule out these possibilities and improve mobile rendering of your app. If your app functions fast but take longer to render content on the screen, it is a negative performance signal.

To measure mobile app metrics, you should also be benchmarking your app based on resource usage.

Every year, mobile devices have been increasing storage specs. However, mobile device memory capabilities cannot be compared to those of laptops and desktops. Therefore, your app should be designed and developed in a way that it does not consume a large part of the memory.

Below are the mobile app resources you should monitor:

Crashes refer to shutting down of the app abruptly while the user is using it. If your app crashes on a frequent basis, then it’s time to take the desired steps to curb this.

An app crash is not acceptable as it harms your mobile app performance and usage significantly.

You should be troubleshooting crash scenarios on multiple devices and operating systems for measuring the following:

There are several tools in the market to monitor crash reports – Crashlytics, Countly, HockeyApp to name a few. 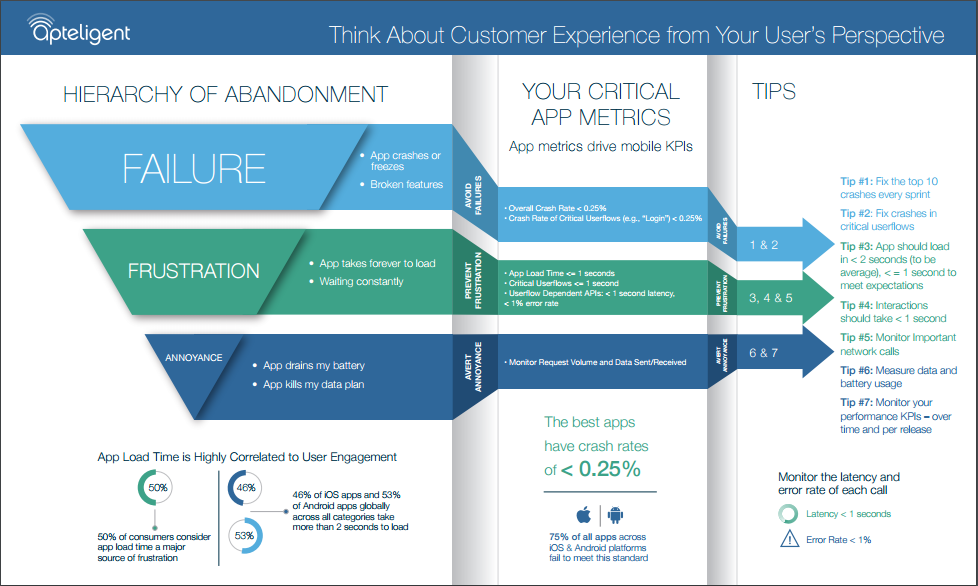 This is a measure of the maximum your app can stretch to handle requests/transactions at once. This way you can be well informed of the scenarios which your customers might encounter if they try to access something multiple times. By checking on how much stress your app can take so that you know when you need to scale it.

To make sure your mobile app performance improves to withstand the extra load, you should consider practicing:

An app infrastructure benefits from 3rd party API services to perform various functions. The round-trip time taken by these services to render a request and a response is referred to as the API latency. An ideal response time for an API to respond is 1 second.

For every API your app calls, measure the time it takes to respond on an average. For concurrent requests, the time to respond adds up with every API call. The apps technical architecture should be able to manage parallelism and concurrency.

To optimize the API service delivery, you should make sure your app follows these best practices:

Mobile app speed is a metric that you cannot afford to ignore. If your users find the app slow, they would uninstall it right away!

The number of requests to the back-end servers determines the speed of your app. The more such requests, more are the chances that your app might crash or slow down.

The list of requests that contribute to the increase in response time include:

To improve your app speed, you should:

By catering to all these mobile app performance metrics even before launch, you will be able to save a lot of effort as well as overheads. Both the front-end and back-end performance is vital to the app functioning.

With an exponential rise in mobile app competition with smartphone adoption, there is a very direct correlation between these metrics and your business performance.

Regular app performance monitoring and testing drills will help you prepare and scale your mobile app for the market.

Do you think we missed out any mobile app metric that you consider before rolling out your app for your audience? Share it with us in the comments section below!