Need a reason why people uninstall apps? We give you more than 10. 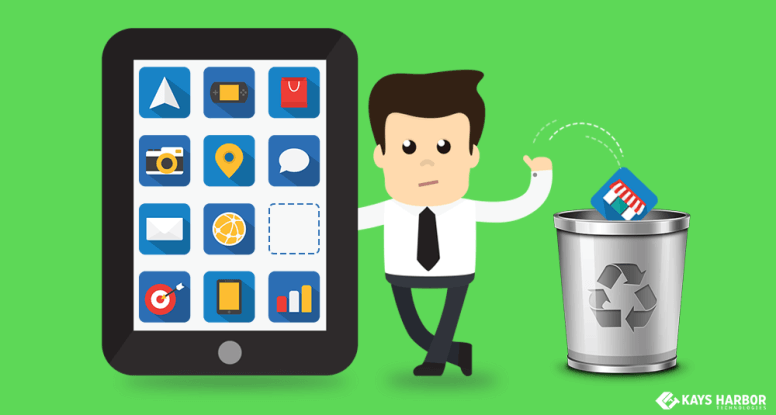 Why would you uninstall a mobile app?

With their limitless use, mobile apps help us in every chore we can image, right from checking our pulse rates to checking into a hotel. A 2015 study by Google says that an average user has 36 applications installed in his device out of which only 9 are used on a daily basis. And why is that only 48% of installed apps manage to impress us for a month? What leads to only 4% of them lasting with us for more than a year.

These figures compel us to find out why people uninstall apps so frequently. It necessitates understanding their average life cycle, especially if you are planning to develop a mobile app for your business. The points below can serve as a ready reckoner around the most common pitfalls you should avoid during your mobile journey.

Discover why people uninstall apps from their mobile devices

The description of an app is the first thing a user sees and if it doesn’t deliver what it claims, it’s wiped away. Avoid buttons or links that don’t generate any call to action nor provide any function. 55% users interact regularly with their apps which falls to 35% if it fails to deliver in terms of functionality, interface and purpose described. Therefore, the app is eventually labelled as “misleading” and this counts as a big reason why people uninstall apps.

A user wants an app that takes no longer than a few seconds to load. An app that takes forever and ever to start and then takes them through pages of tutorials is not something that is going to retain them for long. Time is precious and to save it is why people uninstall apps so frequently. That it why apps that launch within 2 to 3 seconds of tapping their icon are generally approved by most users.

If you constantly feel the need to restart an app due to sluggish performance or unresponsiveness, you will discard it very soon. An online coverage by Forbes suggests that 71% users complain of crashing and 76% claim freezing as a major reason why they uninstall their mobile apps.

Related: 5 areas to account for in your mobile app development costs

Too many advertisements is also a reason why people uninstall apps from their phones. There are plenty of free options around us. An app that doesn’t let you skip the promotional video in a single tap will be dropped in favour of the one that does.

Too many and too frequent push notifications will eventually result in a user being disturbed and then the obvious uninstall happens. Therefore, it becomes necessary for any developer to know how to best use push notifications for their benefit.

No user goes about killing every application every time he exits it. A faster charge depletion becomes a big reason why people uninstall their apps. If it causes unusual battery drain, it will be removed sooner.

I like’m pretty but not dumb. An app that is beauty with brains provides a user-friendly design and full on functionality. Lack of it drive users to uninstall them. Negative reviews about the general interface and app experience too play an important role here.

Like pointed out earlier, with abundant free apps around us, scope for paid apps is rather limited. Experts say that it is essentially true in case of business related apps. They lose about 24.6% of their users because of paid features that are otherwise not available.

A mobile application that does not support your language gets uninstalled instantly and in this case it is a very obvious thing to do for any user. “Oiennofbd ubfifn ooiwfhowidn oiihiw inouniqw,” that’s gibberish for “now you know why people uninstall their mobile apps.”

A trait in many apps that is not mandatory but still in use is social media profile linking. Many users do not find it worthy of much “likes,” mostly because they don’t want to share their intimate details. Since there is no alternative to register for it, this becomes a big reason why you would want to uninstall that app.

For a once in a while traveler, an airline app for mobile check-in would be rendered uselss once he returns from his trip and there are studies to back it up. 1 out of every 4 apps is abandoned the moment its purpose is solved and this is a big reason why a user would uninstall their app. But the key here is to keep them engaged. By providing them with useful travel trivia, for instance, they can be persuaded to retain the mobile app and re-convert to a paying customer in future.

Newer options replace the older ones and that is a major reason why people uninstall mobile apps. This helps them gain new and additional features, upgrades and wider compatibility. Close to 29% of business apps are uninstalled when users find a better alternative.